The capping agent is the key: Structural alterations of Ag NPs during CO2 electrolysis probed in a zero-gap gas-flow configuration

We apply silver nanoparticles (Ag NPs) as catalysts of CO2 reduction in a zero-gap gas-flow electrolyser. Ag NPs stabilized by different ligands —branched polyethylenimine (BPEI), polyvinylpyrrolidone (PVP), polyethylene glycol (PEG), and citrate— are used in the experiments. The as-prepared NPs have almost identical initial size distributions, yet their catalytic performance, in terms of achievable current and CO selectivity, is different. During electrolysis all Ag NPs exhibit unambiguous morphology changes; the degradation pathway they follow, however, markedly depends on the chemical nature of the capping agent stabilizing them. Scanning electron micrographs obtained before and after constant-charge electrolyses carried out at different potentials reveal that amongst the studied ligands, BPEI seems to be the most effective stabilizer of Ag NPs; in turn, however, BPEI also limits CO formation the most. In case of PVP, mostly corrosion (particle shrinkage) is observed at practically relevant electrolysing potentials, while the application of PEG leads more to particle coalescence. Ostwald ripening seems to appear only at high applied (H2 forming) potentials in case of the three afore-mentioned ligands while in case of citrate it becomes significant already at mild (CO forming) voltages. By studying the effects of capping agent removal and exchange we demonstrate that apart from ligands directly attached to the Ag NPs, also the excess of capping agents (adsorbed on the electrode surface) plays a decisive role in determining the extent and mode of catalyst degradation. The results of SEM-based particle sizing are also confirmed by synchrotron based wide-angle X-ray scattering measurements that provide further insight into the evolution of crystallite size and lattice strain in the applied Ag NPs during electrolysis. 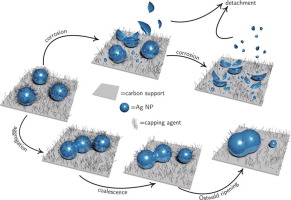