The local atomic structure and the magnetic response of Co films intercalated between Graphene and Ir(111) were investigated combining polarized X-ray Absorption Spectroscopy at the Co K edge with Magneto-Optic Kerr Effect. The structural and magnetic evolution upon a 500 C annealing was evaluated as a function of the film thickness. After the thermal treatment, our thick film (10 monolayers) presented a lower perpendicular magnetic anisotropy (PMA) as well as a reduced average structural disorder. On the other hand, in our thin film (5 monolayers), the annealing enhanced the perpendicular magnetic response and induced a local anisotropy by stretching the Co-Co bonds in the film plane and compressing those outside the plane. Our finding emphasizes the close relationship between the local structure of Co within the film and its magnetic properties. 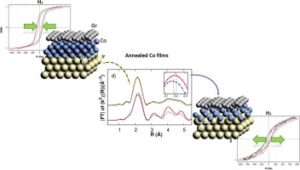